Folks, PokaPaloma has been banned from the “chat” portion of the live stream of the Bay 101. 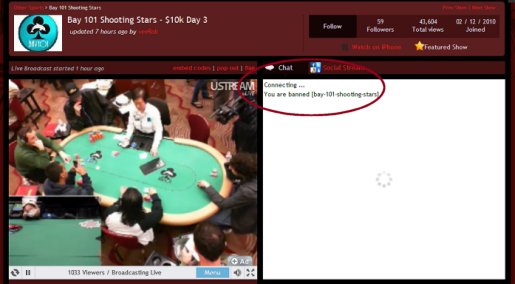 I’ve been racking my brain for a reason. Let me see…

Compared to the embarrassing crap that I saw “people” – and I use that term lightly – exchanging like their racial prejudices, use of the “N” word, ridiculing overweight and “plain” looking dealers, discussing the dealers’ and female players “racks”, making fun of Maria Ho’s last name, debating just how cute Jen Harman is… and so on.

And then there were the jokers masquerading as Marc Seif, Mike Matusow,  DaveWilliams, etc.

And then there were the unappreciative SOBs who complained about a blurry image, the sound disappearing for a few minutes, a “wrong” angle at a table… and so on and so on.

veeRob, Kevinmath and Matt…You re-Tweeted my tweets promoting the live stream and now you ban me?