Wednesday night I played at one of the Eastern Poker Tour’s No Limit Hold’em tournaments and finished in second place.

The Hand That Did Me In AKA How I Did Myself In
Once again, I’m remembering the ONE hand that I couldn’t let go of…that I played like a donkey and lost a ton of chips. That night, the cursed hand for me was Ah Qh. I lost 2/3 of my stack on that one – something like 108K. We were down to 3 – 4 players at the final table. From the Small Blind, I opened with a 35k bet. The blinds were 6000/12000. The Big Blind called. The Flop was 9 2 6 rainbow. I bet 35K and the Big Blind insta-called.

Hummm. I felt uncomfortable with how quickly he called. Time to slow down? Did he have trips? I didn’t think that he would act that quickly with a simple pair and such low cards on the board. The Turn was a black K. I thought I had two moves…All In or Concede by checking. I wasn’t very confident that he had trips, but, the bottom line is that I couldn’t fire a third bullet. I chickened out. I had tanked longer than I usually do and thought that that had given away the weakness of my hand, so, I checked.

Had I thought it through correctly, I would have realized that I had priced myself in. Hee Haw…
So, the better move WAS to go All In at that point. [Later the Big Blind said he would have folded his 9s had I gone All In when the K came on the turn.] The Big Blind went all in for his last 32K. I had to call with such a big pot. At least I had 6 outs.

River: ? Don’t remember. Nothing that improved my hand. 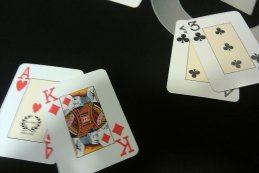 Final Hand
I was heads up in the Big Blind with 3c 4c. I pushed All In (out of order…ooops). Got insta-called by the Small Blind who turned over  Ah Kd.

Turn: 4d
Oh – a little blip of a heartbeat. There’s one of my runners…a little light in the tunnel.

River: 9h Dun..dun…dunnnn. And I’m out in second place. 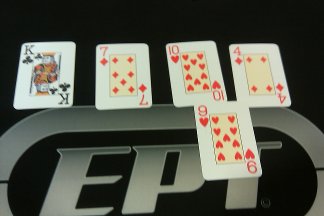