You are here: Home / No Limit Hold Em Tournaments / The Donkey that is the Eastern Poker Tour – Part 1

Friday afternoon, I rushed home from York Beach Maine in order to do a laundry, and then go to the hotel I had reserved in Rockland MA for Friday and Saturday nights. I reserved a hotel room so that I would be fresh and awake for the long, all-day sessions I anticipated for Saturday and Sunday. The Pembroke Country Club is about 1.5 hours from my town. My thought was that I had worked hard to give myself every advantage in playing these tournaments. I didn’t want to put myself at a disadvantage by fatiguing myself by getting up extra early or by driving the 1.5 hours back and forth…or getting stuck in the Saturday morning summertime traffic heading toward the Cape…and returning home at who knows what time of day. There was no way of knowing what time we would reach the winning 10 – or – you would bust out. The EPT had e-mailed out and posted (on its website) “stern” rules about arriving on time and registering for the events. I had worked too hard to have any fluke accidents…hence the hotel.

While I was waiting for the laundry, I decided to catch up on my e-mails.  Unbelievably, there was an e-mail from the EPT that had been sent Friday afternoon at 1:22pm announcing the cancellation of the $30K Championships tournament. 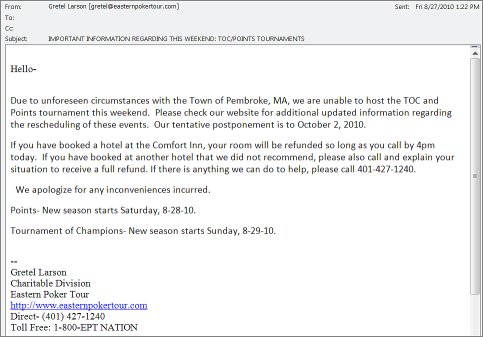 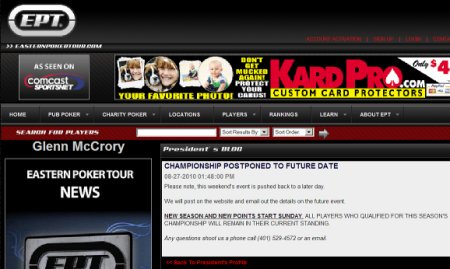 Please note, this weekend’s event is pushed back to a later date.

NEW SEASON AND NEW POINTS START SUNDAY: ALL PLAYERS WHO QUALIFIED FOR THIS SEASON’S CHAMPIONSHIP WILL REMAIN IN THEIR CURRENT STANDING.

So What’s my beef?

First of all, the subject of the email is SO ambiguous: IMPORTANT INFORMATION REGARDING THIS WEEKEND: TOC/POINTS TOURNAMENTS. If you have ever played in a tournament, you are expecting the Rules & Regulations…and guess what the subjects of those of emails are? “IMPORTANT INFORMATION REAGARDING”… It is highly likely that this email was mistaken by some players for the standard Rules & Regs email and deleted without reading or simply ignored.

Second of all, the TIME OF DAY that the e-mail was sent (1:22PM) and the notice was posted on the website (1:48PM)  is incredulous to me. 1:22PM and 1:48PM the day before the tournaments are about to start…less than 24 hours before? Who in the world was online on a Friday afternoon in the late Summer? And if they were on line…Who in the world would be able to cancel their hotel reservations in time?  I didn’t even get to read the email until after 6:00pm Friday. IF I could have modified my hotel reservations, it was already too late to cancel Friday because the hotel Check In started two hours earlier.

Also incredulous is the total lack of respect for the very people who put money in Glenn’s (Eastern Poker Tour’s owner Glenn McCory) pocket week-in and week-out. And I’m not talking about 4 or 5 players. There were about 800 players expected to play this weekend. The absolute ARROGANCE of the organization to wait so long to make the cancellation accouncement is midboggling. As if all any of their loyal players had to do on a Friday afternoon in the Summer – was to read emails from the EPT or read the EPT blog?  I’m thinking John McEnroe – “You can not be serious!”

The ARROGANCE of putting a note in same announcement – in CAPS and UNDERLINED (capitalized and bolded, I suppose because it is the most important piece of the announcement) that the new season begins Sunday… totally blowing off the cancellation notice. So let me get this straight. Is Glenn saying…

“We just screwed you getting every last dollar out of you while you played liked maniacs this month in order to maintain and improve your rankings – and we are announcing in capital letters and bold that we want you to give us more of your money starting this Sunday.”

How f’in stupid does Glenn think the players are?  The donkey that is the Eastern Poker Tour Headquarters surely needs a lesson in how to treat customers.

The cowardice demonstrated by McCory in having someone named Gretel – whom I’ve never received an e-mail from before but I think I saw a picture of in one of the highlights – deliver the bad news. (I hope Gretel wakes up some day to understand how she was used in this drama that Glenn created.) Glenn has his own e-mail and has used it in corresponding in the past (Glenn McCrory [glenn@easternpokertour.com]). One curious thing I have noticed over the last 3 -4 months is that looking at the website, Glenn’s involvement is less and less evident. His contact information has been removed and he is hiding behind his franchise owners and employees.

And, where was the Eastern Poker Tour employee or rep Saturday morning? Did the organization send someone to the Pembroke Country Club to greet players and explain? to apologize?

Ahhh, that would a “NO”. I was there and no one representing the Eastern Poker Tour was there.  I’ll tell you more about what I learned tomorrow… And what about the franchise owners who are the ones who are going to lose from here on out… what do they have to say?