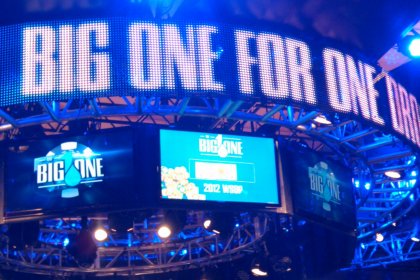 Looking at the Final 8 for The Big One poker tournament, I think of the balance of life; From nearly 40M in chips down to just over 7M in chips. Ages from 62 down to 26.  (There’s some bell curves for you.)  Five of the players are from the United States. Brian Rast and Phil Hellmuth are in the mix, and I’d love to see a rematch with those two going heads up as they did last year in the 2011 $50K Players Championship.

Looks to me like no one is really out of the tournament. One double up is all the lower chip stacks need in order to be back in fighting position. Esfandiari has been guarding his chip lead for some time, and I expect that he will be playing heads up. I look forward to watching the play today.