You are here: Home / Caro's Book of Poker Tells 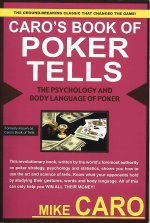 A little over 300 pages, this reads a lot faster due to the structure of the book. Caro uses lots of photos to demonstrate the poker tells and includes full-page charts (“MCU Poker Charts”) to present choice rounds of poker.

There are 12 chapters in all. Four chapters include introductory material like a chapter on “How To Read This Book”. The four chapters that follow are the meat of the book – Poker Tells – and are presented in four broad categories; “Tells from Those who are Unaware”, “Tells from Actors”, “General Tells”, and “The Sounds of Tells”.  The meat is followed by two review chapters that are followed by a self-quiz, and a Final Thoughts chapter.

In chapter three, Caro justifies the need for poker players to study tells. He presents “Caro’s Law of Loose Wiring”. The examples Caro uses to explain this law illustrate that the decision to play a hand by both pros and non-pros is based on whim, and not any hard-and-fast rules that say “these hands are playable and these are not.” Given that “law”, it behooves poker players to study tells in order to recognize certain truths about behavior so that they graduate from playing their cards to playing the player.

Of value to the reader:

What I liked most:

What I Liked Least:

If I ruled the world:

Is it worth reading? Yes
Is it a must have for your library? No. You can borrow a copy from your local library, or, if purchasing, a second-hand copy will suit you fine.
Is it good for novices? Yes, for the tells and the photos.  I think the MCU Poker Charts will be more readily adopted by frequent players, especially those wanting to build a name for themselves in the poker world.

Have you read Caro’s Book of Poker Tells?  Leave a comment about how you rate it. If you think my review is spot-on, retweet it by clicking on the green “tweet” button above.

Get it now at Amazon.com