Last night, the 2012 WSOP Main Event played down to 9;  the Nine players that will return October 28th to play down to one and the coveted bracelet.

Eight of the October Nine are from the USA, and one player, Koroknai,  is from Hungary.

Returning in October are:

Sadly, neither of the women made it. There were two females, Gaelle Baumann and Elisabeth Hille, still vying for the final table when play was down to 18. Through Twitter, I saw that quite a few male and female spectators were rooting for at least one to make the final table – and Gaelle Baumann almost did. Her A 9 ran into Koroknai’s A J and neither improved. Gaelle had had a notable stack for several days.

Interestingly, both women bubbled; Elisabeth went out in 11th and just missed the final table of 10 for last night’s play, and Gaelle went out right after to bring the number of players to 9 – and the October Nine were set.

It was a quiet week last week as no events [that I could find] were streamed; not even the final table for the 2012 National Championship event.  I saw tweets about players being moved to and from the “featured” table during the Main Event tournament;  probably for TV, cuz’ I couldn’t find any featured tables with or without commentary being streamed.

The 2012 Main Event played on. They are down to 27 and will reach 9 today/tonight – and we’ll have our October Nine or whatever they decided to call them.

The final table for the 2012 WSOP National Championship tournament will be played out today starting at NOON Vegas time.

Final 8 players in chip order are:

No tournaments starting this week.

The most prestigious no limit hold’em tournament in the world – the WSOP Main Event – starts at Noon today at the RIO All Suites Hotel in Las Vegas.

Sitting at the poker tables last week, it was evident that the Main Event was on its way. Each night I played, there were more and more players from other countries. Conversation revealed that they had flown in for the Main Event. Indeed, they were practiced players with bankrolls. Tuesday night at one table we had 3 from USA, 1 from Belgium, 1 from Norway, 1 from England and the remaining from other countries which escape me now. Thursday night at Planet Hollywood, Jamie Gold played at a $2/$5 table. He won a huge pot right off the bat – up to $700-$900 (table max was $300) in a single hand. He didn’t stay long… Last year while I was playing at the MGM, he did the same thing days before the start of the Main Event. My theory is that he comes out to practice with the masses to remind himself of how to play with the up-and-comers and wanna-be’s.

Great pic that gets the nervous anxiety of anticipation going is over at the WSOP website , first snippet in The Daily Shuffle for Saturday by Nolan Dalla.

Another great pic of the registration line over at PokerNews.com in its All Mucked Up daily blog written by PokerNews staff.

The 2012 WSOP Main Event is Event #61. There are three Day 1s, and today is Day 1A. It is listed as a ten day tournament – although we all know there will be a huge break once they get down to nine players. This year, there will be no November Nine as the final table will take place in late October. But… let’s stay focused on the excitement of getting to those nine… 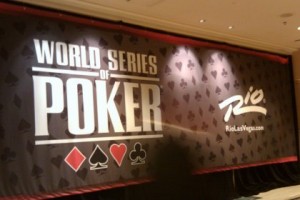 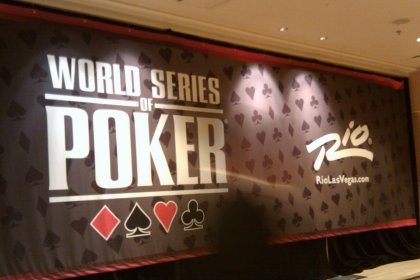 That’s a wrap for The Big One in Las Vegas. Three other events are active now, including a $10K N0 Limit Hold’em tournament. About 5 -6 other tournaments are on deck!

Hellmuth just jammed all in with A10s. Trickett called with AQh. Hellmuth was up on the flop that included a 10 and had 2 hearts.  Turn was Kd. On the flop Trickett had 17 outs and made a straight when Jc completed the board.

Rainbow flop with a K. Turn. River. Kings take it.