You are here: Home / Archives for WSOP / Getting into the WSOP

Getting into the WSOP

Waiting to get into the 2009 WSOP Main Event Final Table… When you first arrive, you’re anxious and shift your weight from foot to foot to expend some of the energy. Then you start talking with those around you, then the poker pros start to arrive, and you turn into a real tourist!!! Here’s some of the photos that I got of poker pros and one very special couple… Phil Ivey’s #1 fans…

Mel and Pat Humphrey stood near the entranceway for quite a while and took photos with all the spectators that wanted to pose with them.

Wendy Moon, Darvin’s wife, was very visible throughout the day in the shops, eateries, halls, and Penn & Teller Theater (of course) and very friendly and accommodating to the fans. Here she poses in front of a banner of the great Johnny Moss, a multi-time champion of the WSOP. Banners of former WSOP Champions lined the (waiting) hallway of the Rio.

Greg Raymer walked down the very long line of spectators several times. He was super friendly and very accommodating to the fans – signing autographs left and right.

Phil Gordon was also generous with his time and walked the line of spectators waiting to get into the WSOP a couple of times, stopping along the way to sign autographs.

While we were waiting in line, one of the guys in front of me was standing reading Phil Gordon’s Little Green Book of Poker. Suddenly he realized that Phil was in the area… 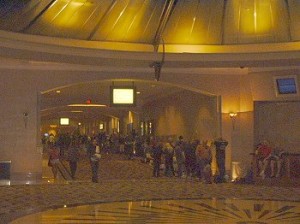 This post covers getting into the WSOP’s second day of Final Table play, Monday, November 9, 2009 when the final 2 played for the championship of Event 57, the $10,000 No Limit Hold’em tournament of the 2009 WSOP.

Just like Saturday, getting into day two of the WSOP Main Event Final Table was a matter of time. How much you want to witness the final 2 = the amount of time you invest in standing in line. All you need to do is get to the Penn & Teller Theater at the Rio All-Suite Hotel & Casino at a time that will get you into a nice place in line.

8:30 PM Monday, 11/09/09
Arrived at the Penn & Teller Theater at the Rio All-Suite Hotel & Casino. Got in line. This time, I was not in as good a position as on Saturday. I was in line down in the rotunda portion of the hallway about 150 feet from the entrance, and unlike Saturday were the line cut diagonally across the rotunda, spectators were lined up against the walls (meaning many more were in line). There were about 70 – 80 more people in front of me. It was hard to tell with more accuracy because the spectators were very spread out.

10:07 PM Monday, 11/09/09
I am seated in the first balcony (mezzanine of Penn & Teller Theater). View was excellent because there were not as many camera people nor camera apparatus blocking the spectators’ side of the table.

Both players are on stage. Darvin Moon is signing autographs on the left front of the stage and Joe Cada is on the right side of the stage talking with supporters decked out in their yellow long-sleeve “Cada” t-shirts. Curiously enough, Davin Moon is wearing a yellow shirt.  Hummm… earlier in the day, I had read an article in the Las Vegas Review-Journal which quoted  Moon as having said, “…Cada is favored“. I’m wondering if Moon was trying to send a message with his choice of tops.

10:16 PM Monday, 11/09/09
Both players approach the table. Red arrow on left points to Darvin Moon standing in front of his seat. Red arrow on right points to Joe Cada wrapping up the conversation with his yellow-t-shirted supporters.

10:28 PM Monday, 11/09/09
Vince Neil of Motley Crew prances onto the stage with two Las Vegas show girls. He says a few words about a charity tournament, then “Shuffle up and Deal”. Found this video at YouTube – WSOP 2009 Final Table Motley Crue’s Vince Neil

Found this video on YouTube. It is the last 5 minutes of ESPN’s coverage of the Final Table. 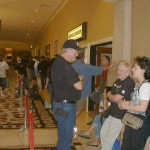 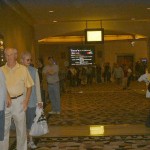