You are here: Home / Every Hand Revealed by Gus Hansen 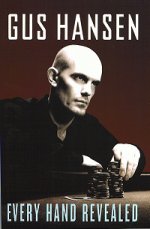 In this book, Gus Hansen, presents ALL the hands he played in the 2007 Aussie Millions Main Event.

There were 746 entrants. Gus emerged the winner, taking home a $1.5 million pot when his pocket Aces held up against Jimmy Fricke’s hole cards of 9c 7c (and an open-ended straight draw).

What did it take to get there?
Gus walks us through it, using an easy, conversational style. He was dealt 850 hands and played 329. For each of the 329 hands, he describes what he was thinking at the time he played the hand and what he thought about his play at the time of writing the book. Mostly, he has the same opinion, but, sometimes he asks himself, “What was I thinking?” or adds a “Do not try this at home!”

The book is divided into chapters by day. At the beginning of each chapter, Gus lays out the day’s goals, must-dos, and wanna-dos. He records how he is feeling both physically and psychologically. At the end of each chapter, he recaps the day, criticizes some decisions, and gives a preview of tomorrow’s goals. For each hand, Gus sets the stage: current blinds and ante, his position, his chip stack, his cards, and the number of players at table.

I really enjoyed this. Gus’ truthful self-evaluation is refreshing. It is an easy read and one of those books you will likely return to in the future. Not so much to emulate Gus’ play (for most of us), but for understanding how a master poker play thinks, going through a mental checklist of things to consider before making a move. The checklist, of course, includes the math, size of the pot, pot odds, implied odds, position, number of players in the hand, tournament level, time of day, goals for the day, opponents’ chip stacks, read on the opponent, and on and on.

I think Gus’ book does a good job of driving home the point that there is no “one” way to play a hand; each hand is subject to different responses depending upon the current circumstances. I know you know that, but, here you see it in action.

Curiously enough, several times Gus talked about how losing a particular hand would psychologically affect his poker play moving forward. He also talked about the psychological toll a play by him would affect another player. I enjoyed the peek into the “psychological warfare”.

It doesn’t matter that I will never play over 60% of the hands that Gus played. I still look forward to reading through it again. If you haven’t read it, get it.

Get it now on Amazon.com