You are here: Home / No Limit Hold Em Tournaments / The Donkey that is the Eastern Poker Tour – Part 2

(This post has been in the works for a while now. Time to finish up the Eastern Poker Tour No Limit Hold Em Tournament cancellation story and move on.)

Even though the no limit hold’em tournament had been cancelled, I showed up to see how the Eastern Poker Tour would handle “the morning of”. A friend in the travel business had told me that when large events got cancelled at the last minute, the sponsor of the event would send representatives to the venue at the scheduled time of the event in case registrants were unaware of the cancellation. The sponsors would be there with time-of-the-day appropriate drinks and goodies – and – profuse apologies. You know, those drippy, sickening sweet kind of apologies. The ones that make you think that maybe they do care. Maybe there was a last minute glitch. So my friend encouraged me to go see how the Eastern Poker Tour was going to handle the cancellation of its $30K No Limit Hold’Em Tournament. 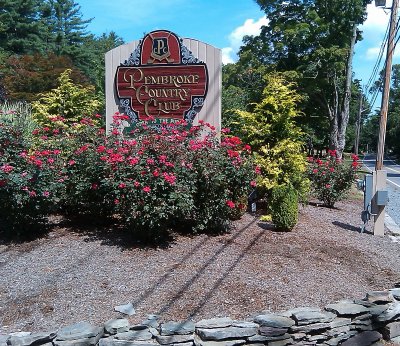 When I turned into the driveway, I stopped to take this picture. No people around. No signs to let me know the event had been cancelled. Just beautifully manicured grounds and quiet…a lot of birds and early morning sounds.

I drove up the long windy entrance to the general parking.  At the top of the entrance where the driveway spills into a wide and long parking area, there was a man leaning against the open tailgate of a small black pickup. He was dressed all in black. Casual clothes. On his left breast was a logo I couldn’t make out from my seat in the car. For a brief moment, I thought “Yeah, the Eastern Poker Tour does care!” You’re smiling because you know that within the next second reality hit…I slowed the car to a crawl, rolled down the window, and asked if he was with the Eastern Poker Tour. He replied, “No”, with a snicker. “I’m the Chief of Police for the Town of Pembroke.”

Okaaaaayyy. The Chief of Police. So that was unexpected, and, my brain spent some time trying to process it. No reps from the Country Club. No reps from the Eastern Poker Tour. No coffee. No donuts. No aplogies at any level. Instead, a police presence.

The short story is that we spent the next 45 minutes talking. Mostly about the process an organization like the Eastern Poker Tour has to go through to hold a No Limit Hold’Em tournament in the town of Pembroke.

The weekend prior to this scheduled no limit hold’em poker tournament, I had driven to the Pembroke Country Club to scope out the layout, the parking facilities in order to come up with a plan for getting to and from the hotel, etc. On that Saturday, three Country Club employees told me that the Eastern Poker Tour event was not going to be held there. The next night, I mentioned this to the franchise owner of the tournament I played. He said that he had heard differently and that he would confirm. The next night, he told me that he had checked on the information that I was told, and he was told that there was no truth to it. Okay, we move on. The No Limit Hold’Em tournament will be held at the Pembroke Country Club.

Of course during that conversation we talked about our individual experiences with the Eastern Poker Tour. It was interesting to compare what I was seeing (being told) as a player with the Chief’s perspective of what was going on at the same time.

We also talked about Johnson & Wales Inn in Seekonk, MA and how the Eastern Poker Tour used to hold events there. We touched on the charity tournaments that are associated with all of Eastern Poker Tour’s big events, which got me to thinking…

While we were talking, about 7 – 10 other vehicles arrived with players. One guy I recognized from the Framingham Tour. He wasn’t so disappointed because his family was having a reunion that weekend, so, he would be able to attend. Another 20-ish looking guy had driven from Conneticut with his mother, girlfriend, and infant in tow. The look of disappointment on all their faces is a visual I won’t forget real soon. They all had obviously been very excited.

As I drove down the long and windy driveway to return to my hotel in Rockland, I saw these placed periodically along the side of the driveway. 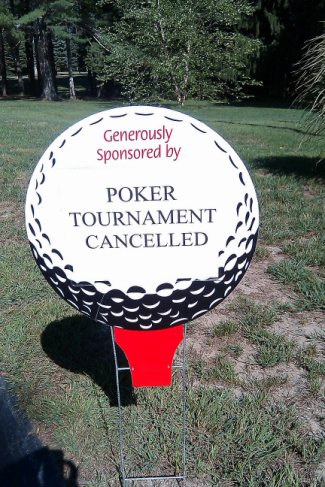