While catching up on the 2015 WSOP stories for the week, I ran across this story on PokerNews.com, “Cheating Allegations in WSOP $10,000 Heads-Up Championship Spark Investigation“. It reports on allegations of cheating during the 2015 10K Heads Up event that completed a couple of days ago. Several players who faced the accused player in the heads-up play acknowledged that the accused exhibited “unusual” behavior throughout their match. The accused’s opponents talked with each other and shared experiences that were eerily, and oddly similar.

According to the article,

“…suspected an opponent of cheating his way to a fifth-place finish in the event and both a Prague reporter and former casino manager said the player in question has a history of marking cards that has seen him banned from casinos across the Czech Republic.”

The player suspected of cheating has been banned from casinos for cheating prior to this.  Are this year’s HU players doubly vigilant because of his past or was his behavior just that “off”, that made his opponents believe that for sure “somethin” was up?

WSOP officials have stated that an investigation is underway.

Naturally, the 2015 WSOP HU fifth-place finisher who is accused denies it all. His story, also on PokerNews.com, is here.

Isn’t the Golf model Viable for the Poker World?

My dream for the poker world is that it moves closer to the “golf” model; clean play, highly-respected players, and an organization that contributes large amounts of money to charity. Not without its own knuckleheads – but so much more respected than the poker profession.

Cheating in poker gives fodder to those who want to ban online poker and/or not have a casino built in their area. They have one more degenerate to point to in order to bolster their “those people” stereotypes and entrench their boots more firmly in their holier-than-thou stance. Let’s choose to not give them that opportunity.

The highly-anticipated WSOP Millionaire Maker tournament started yesterday with the first flight at 10AM. It continues today with the second and final flight which starts at 10AM PST.

Players who bagged chips from Flight A (Friday), are ineligible to enter Flight B.  They will have today (Saturday) off, and will resume play with the survivors of today’s poker play Sunday morning at 11:00 PST.

The Millionaire Maker is a No Limit Hold’em event that debuted in 2013. In 2013 and 2014, it drew the largest number of runners of all the WSOP events, over 6400 and 7900, respectively. This year’s Millionaire Maker is expected to draw a similar amount of participants. Still, it is  unlikely that it will draw over 22K entrants that this year’s COLOSSUS event drew.  We will have the final tally of entrants at end of day today.

Best of luck to all the poker players chasing a million dollar payout!

So, time ran out yesterday before #WSOP5, The COLOSSUS could play down to a conclusion. Today (Wed. 6-3-2015), the final nine players will resume play at Noon PST (3:00 PM EST). I’m guessing that the final 9 will be streamed, but, there are already two events ($1500 Pot-Limit Hold’em and $1500 7-Card Stud) planned for streaming, so, not sure how it will play out. I have to believe that the Final Table of the COLOSSUS will bump one of the other events since it is the conclusion of a history-making tournament. I’ll watch and tweet. BOLO for an event #WSOP5 announcement about the streaming later today.

Glad to see that Cambridge, MA’s Aditya Prasetyo is alive and well, sitting in first place with a chip stack double the size of his closest competitor and that represents 30% of the chips in play! Yes, with these crazy ass winters, we learn patience in Massachusetts!

To learn more about the remaining 9 poker players, click their names which will bring you to WSOP’s player profiles. 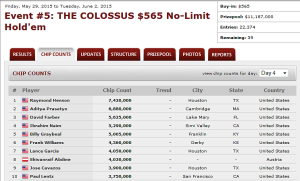 Day 4, today, the final day for the new-this-year COLOSSUS tournament at the 2015 WSOP, opened with 39 players. Over 22K runners started and currently down to 37.

Proud to mention that at this time a Cambridge, MA poker player has the second highest count in chips; just about 6.9 million. Aditya Prasetyo @KingsOnTilt

No more live streaming for 2015. Watch the videos of events that you missed here.  Keep an eye on ESPN for coverage of the Main Event. Final Table of the Main airs in November.

Starts out with pair over pair: Nguyen’s Aces over Merson’s Jacks.

Nguyen goes All In…. 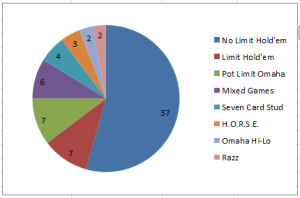 There are 68 tournaments on the 2015 WSOP Schedule, an increase of 3 over last year. If your specialty is playing No-Limit Hold’em, you have 37 opportunities to play for a bracelet; the same number of opportunities as in the 2014 WSOP.

The 2015 WSOP schedule features lower-priced, uber-affordable tournaments. First up is the $565 no-limit hold’em tournament called “COLOSSUS“. The COLOSSUS features a guaranteed $5,000,000 prize pool, 2 starting days with 2 flights per day. No rebuys, but re-entries are allowed (if player busts or forfeits chips from previous flight prior to bagging). If the maximum number of players register for each flight, the tournament will be the largest open-field tournament ever with over 20,000 entrants. In this post PokerListings.com does a nice job of explaining the seating capacity and reports that preregistration for the tournament was already creating a logistic challenge back in March.

Also on the uber-affordable scale is the July 4th weekend $777 Lucky 7’s no limit hold’em tournament; the last tournament before the 2015 schedule wraps up with the $10K Main Event. New to the WSOP schedule, the Lucky Sevens tournament features 1 starting day with two starting flights. Players can re-enter once, into flight A or B.

Here’s how the 68 tournaments in the 2015 WSOP breakdown by game type.


Breakdown by Buy In Fee

Now that you know the game mix of the 68 tournaments, let’s look at the mix by buy in.


There are quite a few affordable options this year.

No Limit Hold’em Tournaments by Buy-In

How much is playing in the 2015 WSOP going to cost you?  Take a look at the buy in mix spread over the 37 no limit hold’em tournaments during this WSOP.

So, how deep is your bankroll going to take you?

The 2015 WSOP Schedule is posted. It features 10-11 new bracelet events including Hyper and Turbo No Limit tournaments, a Super Senior tournament, and the first-ever online WSOP event. 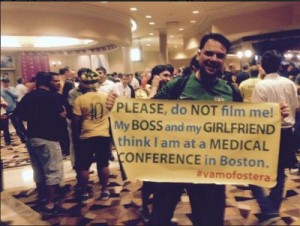 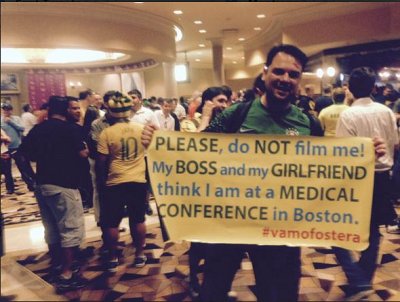