You are here: Home / Archives for Poker Pros 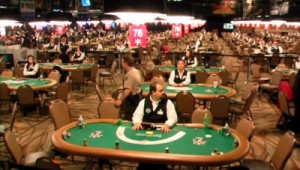 PokerNews.com is reporting that, “All In – The Poker Movie, the award-winning documentary about poker’s growth over the past decade,” will make its TV debut this evening, June 5 at 7:30 p.m. EST on the Showtime channel.

“Unlike many poker-themed films that have flopped, All In – The Poker Movie has been praised by those in the poker media and was even honored with an award at the CineVegas Film Festival.” (PokerNews.com)

If you love no limit hold’em and you follow the poker pros, you’re gonna love this movie. The movie covers the past decade or so of poker; that includes the wonderful story of Chris Moneymaker and the depressing story of Black Friday. The disgusting saga of Full Tilt Poker unfolded after the documentary was made.

In July 2011, I attended Vanessa Rousso’s Main Event Prep Camp. It was a 5-hour, intense boot camp for experienced players needing strategy and an understanding of how to survive and thrive in a WSOP Main Event. With the 2013 WSOP quickly approaching, I’ve been thinking about Vanessa’s boot camp more and more. I had recorded the audio and since the training, have listened to it prior to and during each big event I have played. It gets me pumped and reminds me what to focus on and what to let go.

It all started when I took one day off from work. I had planned on taking two weeks together, but, all I could squeak out of that plan was a day and a half. On this first day, I was on Twitter catching up with tweets when Dennis Phillips tweeted that he was going to be starting his radio show in 15 minutes and Vanessa Rousso was going to be one of his guests.  I tuned in to Phillips’ radio show. He talked to Vanessa about the upcoming 2011 WSOP tournaments in general, and in particular about the 10K Main Event that would be starting in a little over a week. Vanessa talked about how she prepares for big tournaments like that and she mentioned that just prior to the start of the Main Event, she was giving a boot camp training at the Aria – AND – during the radio show, she was giving a free seat to the first person to tweet: @VanessaRousso Work Hard Play Hard…

Yep… that would be me. I won my seat into Vanessa’s boot camp.

The Main Event Prep Camp was offered through Vanessa’s Big Slick Boot Camp. It was a 5-hour poker strategy class. We had three 8 minute breaks. No food, no coffee, no tea, no snacks, no nothin’. Everyone was welcomed, of course, to get up and leave and come back at any time.  The nearest food area in the Aria was about 1/4 mile away. Even Vanessa complained to her step-father (manager of her boot camps) about the distance between the conference room and the concession area and restaurants. I stayed put with my water and peanut butter crackers so that I wouldn’t miss anything. That worked until the last hour when I was really hungry and water deprived and started having to work real hard to focus, started losing portions of the information being shared.

When Vanessa started the class, she was openly disappointed with the small attendance. She said that 20 – 25 players had signed up. She questioned the manager of the camp (her step-father) about the number of people expected.

After that, Vanessa took a poll of the 7 – 10 players in the room. Two were registered in the Main Event. Some others had no intention of playing the Main Event this year, they had attended in order to find out what they would be in for in future years. Vanessa was openly disappointed with the level of players attending her boot camp. More players straggled in as noon approached (started at 11:00AM).

Once she got going, Vanessa was like the Energizer bunny… non-stop information and exercises. We did lots of math. Went over the levels of players and what players at each level are thinking. We reviewed the 2009 schedule of play, average starting stacks each day, levels of play per day, number of players, and talked about different strategies for getting to day three – first pay day!

The main event is a marathon and there is no “reward” for having a huge stack of chips until much later in the event.

When we signed in, we had received a booklet; kind of a workbook, with pages of information and lots of pages with exercises on them. As the camp progressed, it was discovered that the pages were not the same in each booklet. At first, pages were photocopied and handed out, and finally, the manager just gave us all a second booklet that had the missing pages. Awkward, but, it worked.

Uh-oh. The microphone started cutting out – and it got to her. It surprised me how Vanessa let that slightly malfunctioning microphone rattle her. She plays poker with the best players alive, which I presume takes nerves of steel and intense focus, and she’s getting off track, distracted from her mission and whining about the microphone. Maintenance called…microphone fixed.

Back to the Lessons…

If you find yourself at a table of super-aggressive poker players and it is early in the tournament, consider how tables are being broken down. How long do you need to hold on? Might your table be broken soon? If you don’t know, ask the floor. Maybe your best strategy for that table mix will be to “hang in there” until the table breaks.

Pre-Tournament:
Eat, sleep, and exercise. Use same routine the days of the tournament. Surround yourself with positive people. Do not talk about “when you get busted out of this tournament”.

During the tournament:
Sunglasses
Hat
Mood controlling strategy – ie. Music
Conversation – Do not give out any information about yourself, especially your profession. If you won a satellite into the Main Event, do NOT tell anyone. Tell people you bought your way in.

Most important piece of info–> Vanessa taught us her special way of calculating the “real” shape she is in in a marathon poker tournament. We did a number of exercises to make sure we understood the formula to use and when to use it. In addition to calculating that number, Vanessa instructed everyone to also always be aware of their chip stack in relation to the average chip stack.

When the logistics were working, Vanessa was on fire. She told relevant anecdotes about her and others’ experiences. She gave impromptu quizzes. Big Slick Boot Camp and GoDaddy imprinted T’s, hats and other collateral material served as prizes. She recommended books. Answered attendees’ very specific questions. She stayed quite a while after to answer more questions and pose for pictures. Her breadth of knowledge and understanding of the game were impressive.

P.S. I tried to play poker after eating dinner at the Aria. I was 28th on the waiting list; a 2-hour wait the floor man said…I left.

A brand new documentary is being released in theaters this week titled All In – The Poker Movie.  I haven’t seen it yet but hear that it is one of the best poker documentaries covering the past, present, and future of online poker.

Link to abstract about radio show (if you missed the date, the show will still be online) talking with Chris Moneymaker about the new documentary All In – The Poker Movie.

Pokernews is having fun with March Madness. It has converted the Global Poker Index’s top 64 poker players into March Madness

” Behold, the inaugural PokerNews Fan Bracket! We took the Global Poker Index’s top 64 players and seeded accordingly. Now, it’s your job to head on over to our Facebook page and vote for your favorite players from the Round of 64 all the way to the championship matchup.
…….

The voting schedule is as follows:

See the chart and read the whole story by Rich Ryan

While catching up on the poker news, I ran across mention of Jason Mercier leading the Global Poker Index (GPI), and he has surpassed Erik Seidel with the most weeks with the top GPI rating.

“Each week, the Global Poker Index releases a list of the top 300 tournament poker players in the world using a formula that takes a player’s results over six half-year periods. Jason Mercier is on top for the fifth straight week and in the process, passed Erik Seidel for the most overall weeks at No. 1. For a look at the entire list of 300, visit the official GPI website.

I had never heard of the Global Poker Index, so looked it up. No wonder…Related to Epic Poker, brainchild of Annie Duke and friends.

Sadly, on Sept.4, 2011, 25 year old up-and-coming poker pro Thuy Doan passed away after battling cancer for several years. Thuy was introduced to the PokaPaloma audience back in December 2009, when poker pros held a head shaving event in support of  Thuy while she was having some difficult treatments. In July 2010, shortly after having her leg amputated, Thuy joined Phil Laak at the poker table when Phil was trying to break the record for longest single-session of playing poker. Read about that experience and see a photo of Thuy “Phil Laak Breaks Longest Single-Session Record“.

Read about the head shaving event “Poker Pros Shave Heads to Show Solidarity“. Thuy joined the pros in Las Vegas and had fun with the antics and teasing and determining whose heads would get shaved.

As ill as she was, Thuy had a positive attitude and talked about her love of poker and her bright future. The poker community has another star in the Las Vegas sky tonight…R.I.P. Thuy

Phil Hellmuth tweeting about Erick and Erica’s wedding this weekend.

In the May 28, 2011 edition of Bluff Magazine’s The Week That Was Kevin Mathers reports that:

“The eight members of the committee are Eric Baldwin, Andy Bloch, Nick Shulman, Joe Hachem, Chad Brown, Savage, Duke (as a non-voting member) and ethics consultant Stephen Martin. More details on the fledgling league to come before their August 5 debut.”

In my IE 7.0 browser, the first portion of the content is cut off.  Here’s what it is suppose to say:

Nominations are now open for determining the 2010 Poker Hall of Fame inductees.

Nominations will be accepted online and fans are encouraged to participate by submitting their nominee along with a brief explanation. All submissions will be tabulated and the top 10 nominations will be reviewed by the Poker Hall of Fame Governing Council. The existing Poker Hall of Fame members and a blue ribbon media panel will then cast votes of the final list of nominees to determine the class of 2010. The enshrinement ceremony is held in concert with the Final Table of the Main Event of the World Series of Poker, held each November in Las Vegas.

Learn more about the criteria the nominated need to meet in order to be considered and Cast your vote today: http://www.wsop.com/PHOF/010.